Optical transmission systems are known as SONET (Synchronous Optical NETwork) in North America and SDH (Synchronous Digital Hierarchy) in the Rest of the World. Optical Carriers are typically known by their OC-x number where x is a multiple of the OC-1 rate of 51.84 Mbps (shades of DS0 but a tad faster). While there is a common world-wide standard for optical systems there are differences but they are accommodated within the standard. North America uses an STS-x (Synchronous Transport Signal) format for frames (packets) and Europe an STM-x (Synchronous Transport Module) format because .... well its obvious really, one is from Europe and the other from North America and even if they were both exactly the same, which they are not, the terms would in any case be different. One day if we ever understand the differences we will add some more information. 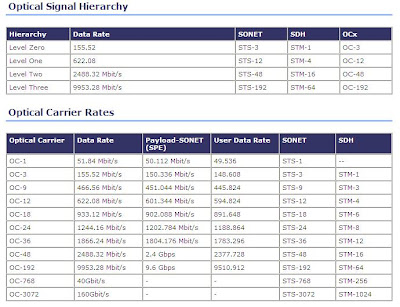 Email ThisBlogThis!Share to TwitterShare to FacebookShare to Pinterest
Labels: SONET/SDH