SSO/NSF with GR and / or NSR

StatefulSwitchoverAn operating mode where a dual processor router has transferred state information to a standby processor to allow the standby to pickup necessary router functions in the event of an active failure. Mostly refers to L2 information (PPP state, FIB ect) but some L3 applicability. In this operating mode both processors must run identical software versions.


NSF refers to a routers ability to almost immediately start forwarding packets following an active processor failure. The FIB (Forwarding Information Base) is initially transferred and actively updated so that when a failure occurs, the router is able to forward packets while the control plane is rebuilt or refreshed


IETF specified mechanisms for interaction between routing protocol peers which allow the peer of a failing device to continue forwarding packets to that device, even though the neighbor relationship has been destroyed.


A routing protocol operating mode where all information needed to fully maintain the neighbor relationship and all its relevant routing information is transferred (or "checkpointed") to the standby processor. No additional communication or interaction with the routing protocol peer is needed in this mode.Some implementations allow the use of both GR and NSR for the same protocol, but single routing protocol session must be either GR or NSR. 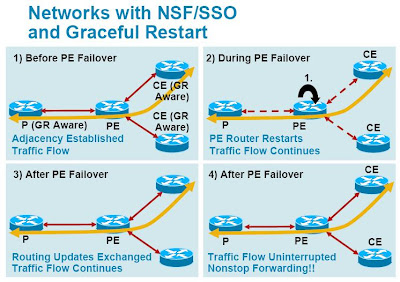 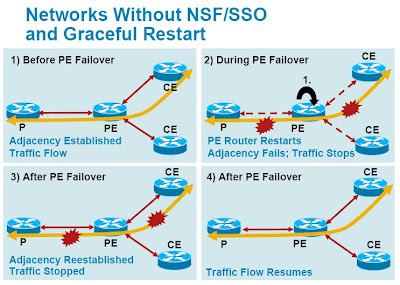 This section documents the configuration of the BGP graceful restart timers.

(Optional) The restart-time argument determines how long peer routers will wait to delete stale routes before a BGP open message is received. The default value is 120 seconds.

(Optional) The stalepath-time argument determines how long a router will wait before deleting stale routes after an end of record (EOR) message is received from the restarting router. The default value is 360 seconds

Email ThisBlogThis!Share to TwitterShare to FacebookShare to Pinterest
Labels: BGP